Home > Blogs > The Recovery & Resilience Fund: an economic stimulus at the expense of territorial cohesion?

The Recovery & Resilience Fund: an economic stimulus at the expense of territorial cohesion?

With the pandemic having widely different impacts across regions and social groups, a crucial question is whether the EU’s Recovery and Resilience Fund will not just support recovery but also promote greater economic, social and territorial cohesion. This blog discusses how Member States have approached the development of National Recovery and Resilience Plans and the implications for regional and local development. We find that NRRPs do not include territorial cohesion as significant objective, may lead to delays in Cohesion Policy spending, and pursuing synergies between the RRF and Cohesion Policy faces significant obstacles. 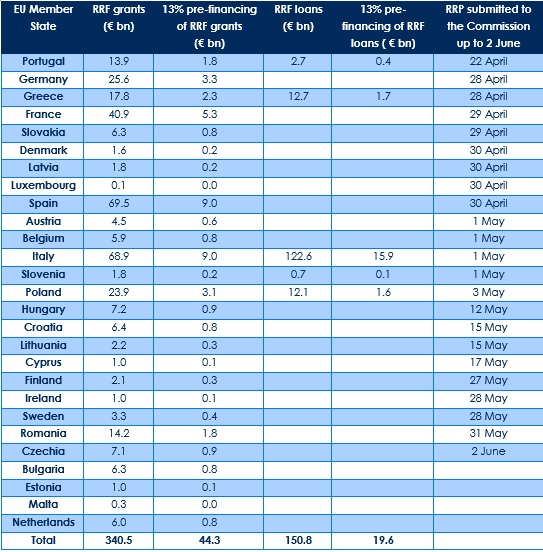 The political importance and profile of the RRF, and its contribution to national recovery plans, is reflected in the lead role being taken on NRRPs by Prime Ministers and Ministers of Finance in many countries. Member States with larger allocations generally have an interministerial committee/commission to coordinate relevant areas of NRRP investment. In several cases, the management of NRRPs and Cohesion Policy are in the same ministry, with a view to utilising the same systems and procedures insofar as possible. More common is a separation of management responsibility for the NRRPs and PAs, with various types of mechanisms (working groups, committees etc.) to facilitate cooperation. In countries with smaller allocations, the coordination mechanisms are less institutionalised, relying on operational cooperation between relevant units in different ministries.

In several Member States, the experience to date appears to be one of close and effective cooperation between NRRP and Cohesion Policy departments in the drafting of plans including several cases of integrated drafting of NRRPs and PAs, but this is not universal. One difficulty has been the prioritisation of the ‘hard’ deadline for NRRPs, in some cases leading to the programming of the PAs being partially suspended or given a lower priority, leading to delays.

The RRF requires engagement with partners (in line with national frameworks), particularly in the preparation of programmes, but this is less of an obligation than the partnership principle in Cohesion Policy. In a small group of countries, regional and/or local governments have actively participated in the development of NRRPs and are envisaged as having a major role in implementation arrangements, although the details are not always elaborated in plans. Elsewhere, subnational actors, civil society and the private sector have been largely involved (so far) only as consultees, at the outset of the drafting process or on draft plans, or project proposers. In part, this reflects the dominance of national measures and the responsibility for reforms and investments at national level.

Commission guidance recommends that decisions on the use of the RRF versus Cohesion Policy are guided by eligibility, allocations, national/regional competences, the availability of mature projects, and investment size. In practice, decisions on funding under NRRPs or PAs are being influenced by three main questions:

Other factors that have played a part in decisions are the obligatory links of the planned investment to systemic reforms, the prioritisation of mature projects, and whether the appropriate legal competences are in place to guarantee milestones and targets.

Demarcation of investment decisions is being undertaken according to several criteria, with a mix-and-match approach based on:

Although economic, social and territorial cohesion are explicitly in the scope and objectives of the RRF, cohesion does not appear to be a significant objective of NRRPs. For the most part they follow a ‘sectoral logic’ with a focus on maximising national economic recovery and growth. Primacy is given to investments that promote the green and digital transitions which require minimum thresholds of expenditure. While cohesion is in many cases (broadly) mentioned among the general objectives / expected impacts of the NRRPs, there is often a lack of detail on how this will be delivered, as well as a lack of performance and impact assessment information.

An explicit territorial dimension of the RRF is often limited or absent. Among the exceptions are a minority of Member States where there is a part-regionalised approach to implementation or ring-fenced allocations are being allocated to regional and local governments or for certain areas (e.g. urban), albeit often focused on green and digital transitions, and with regional envelopes sometimes left unspecified. A weak territorial dimension of the RRF has potential implications for Cohesion Policy and territorial cohesion, including reducing the role of sub-national levels and undermining the multi-level governance principle. To varying degrees, this has the potential to reduce the place-sensitivity of interventions, widen territorial disparities, undermine the principle of thematic concentration, and limit the territorial element of the European Semester.

However, several Member States have acknowledged that a more explicit territorial dimension may emerge as the NRRPs are implemented, and in the development of project selection criteria and projects. There is also an important indirect impact on cohesion arising from NRRP spending on infrastructure gaps and connectivity deficits (e.g. roads / railway networks, broadband access, digital skills, water management, support for sanitation, urban energy poverty / energy efficiency / heating, urban regeneration, sustainable urban mobility, housing) or addressing social inequalities (social inclusion / poverty, access to healthcare, education), which tend to be in disadvantaged regions, urban neighbourhoods and other localities.

References to the correlation of RRF interventions with Cohesion Policy-supported integrated territorial approaches are also present in some cases. For example, there are cases of RRF measures intended to be implemented using (or ensuring links with) Cohesion Policy investments under ITI or SUD interventions.

The positive opportunities from complementary action between NRRPs and PAs are potentially threefold in the view of Member States. 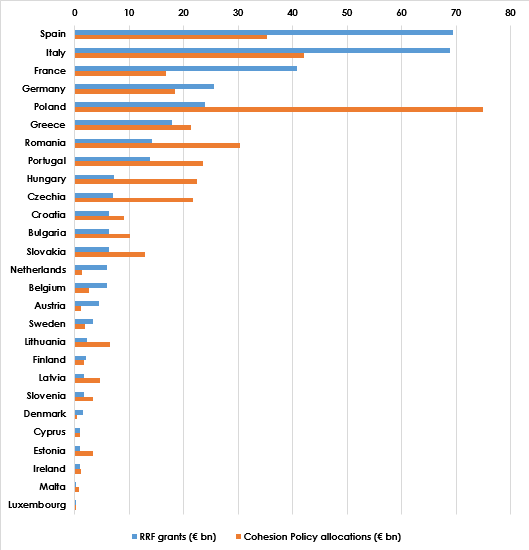 The planning and submission of NRRPs within a tight timeframe represents a substantial achievement for the EU. If the NRRPs are implemented as planned, they will give a substantial boost to investment and reforms, contributing both to the immediate recovery of EU economies as well as supporting the longer term goal of ‘building back better’ and meeting EU goals for green and digital transitions.

Less clear are the implications for cohesion, and there must be significant concerns about whether and how NRRPs interact with Cohesion Policy – for three reasons. First, many NRRPs do not have economic, social and territorial cohesion as an explicit goal. Insofar as cohesion is mentioned, there is a lack of information on how it is interpreted and will be delivered. The involvement of subnational partners and a territorial dimension to planned spending varies greatly across Member States. There are generally no well-defined indications for assessing the cohesion impact of the NRRPs.

Second, the political importance of the NRRPs – often coordinated at prime minister or finance minister levels – and the imperative of the RRF achieving (and being seen to achieve) its ambitious goals may be damaging for Cohesion Policy. Submission of the NRRPs has already been prioritised over the programming of PAs and OPs. The scale of RRF investment support and reforms to be implemented by specific milestones will put administrative capacities under severe strain, potentially diverting resources away from the implementation of Cohesion Policy programmes.

Lastly, there is both a regulatory and cultural gap between the RRF and Cohesion Policy. The Cohesion Policy model of multi-level governance, performance framework, and financial management is much more complex than under the RRF. The experience of implementing the different RRF model, with lighter touch regulatory obligations and expectations, is likely to prompt a debate whether Cohesion Policy rules could be similarly rationalised post-2027. It may also encourage a more prescriptive and centralised approach to Cohesion Policy, weakening further its scope for a place-based policy response to regional and local development opportunities and challenges.